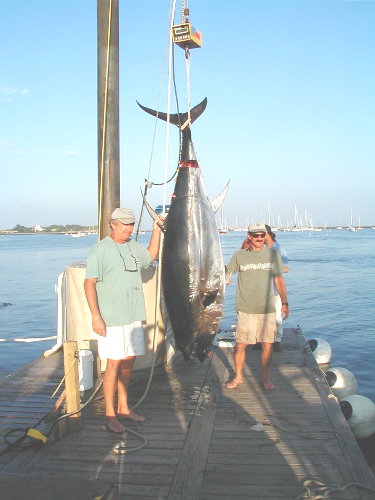 The Gulf of Maine is a great body of water which starts north of Cape Ann, MA. It has a bottom structure filled with ledges and humps along with the famous Jeffries Ledge which provides terrific habitat for bait fish which in turn brings the bigger fish. Whales are a common site on almost every trip and sometimes put on quite a show.  The whales, dolphins and jumping tunas along with the very picturesque Isles of Shoals that are a mere 5 miles from shore means that you will definitely want to bring a camera!

Giant Bluefin Tuna are the stars but sharks and plenty of groundfish such as cod and haddock are also on the menu along with short runs to the grounds making for more fishing and less running. We fish stand up gear or from a fighting chair, your option and all with quality Shimano and Penn International gear. 150 to 200 lb tuna on 50 lb stand up gear is something you will not forget… especially if you like sushi!

I will not even try to explain what it sounds like when a 500 lb plus giant hits and runs 500 yards of line off a 130lb test outfit! You will be dreaming about it for years………

We fish offshore on The Chase, a 30’ Blackwatch express sportsfisherman and limit the number of passengers to four.  Either full or half day charters are available.  For half day charters we generally target groundfish such as cod and haddock with an occasional shot at a tuna. For full day we have the time to try for school or giant tuna, either trolling or live bait, set up for sharks and/or focus on groundfish.

If the offshore seas are too rough or if you are more into light tackle ( spin or fly) fishing we also have a 21 foot CC open boat for inshore fishing and the Striped Bass are generally cooperative.  Either full or half day charters are available and are best with only 2 people.

Both boats are moored in beautiful Pepperell Cove in Kittery, Maine which is located directly across the Piscataqua River from Portsmouth, NH. There are tons of bars and restaurants, beaches, golf courses, cultural events, etc in the area to enjoy when not fishing.

What you should bring:

Captain Steve White has had his license for over 20 years and has fished up and down the east coast for everything from bluefish to bluefin tuna which is his favorite. He believes that safety is number one priority and that it’s more important to have a good time while fishing than how many fish are in the box. Although Steve loves his sushi, he and crew of The Chase support the Catch and Release philosophy for all species. 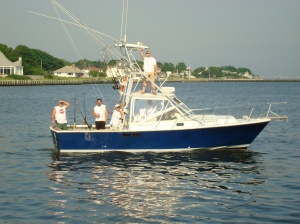 The Chase is a 30’ Black Watch with twin 300 hp turbo diesel Cummins motors, tower, outriggers, Coast Guard inspected with full electronics and quality tackle. She has bunks to rest on and an enclosed head and is noted for her great ride and for raising fish while trolling.